Los Angeles greeting-card artist Wollie Shelley is dating forty men in sixty days as research for a radio talk show host’s upcoming book, How to Avoid Getting Dumped All the Time. Wollie is meeting plenty of eligible bachelors but not falling in love, not until she stumbles over a dead body en route to Rio Pescado—a state-run mental hospital—and is momentarily taken hostage by a charismatic “doctor” who is on the run from the Mob. Wollie fears that her beloved brother, a paranoid schizophrenic living at Rio Pescado, is involved in the murder, so rather than go to the authorities, she decides to solve the crime on her own. As she meets up with an array of small-time crooks and swaggering mobsters only slightly more sinister than the men she’s been dating, Wollie realizes that “getting dumped” is the least of her problems. Finding true love, she discovers, sometimes means learning how to avoid getting killed…

Dating Dead Men will keep readers guessing until the final bullet is shot—and cheering for the irresistible Wollie as she makes her way out of confusion and into the welcoming embrace of Mr. Right.

Kozak has struck gold first time out with a wacky, high-octane plot and characters to match.
—Publishers Weekly (Starred Review)

This incredible debut novel is the first in a series of dating mysteries, and libraries of all sizes will want it for their collections.
—Library Journal (Starred Review)
Newcomer Wollie is funny, brave, smart, and altogether the fetchingest crime fiction heroine since the early Stephanie Plum.
—Kirkus (Starred Review)
[Kozak’s] literary debut is warm, engaging and deeply funny—and offers more insight and depth than is found in just about any other chick lit offering out there today.
—The Washington Post
…Kozak has done a bang-up job…In the fine tradition of Janet Evanovich and Stephanie Plum, Kozak and her creation pack a welcome laugh into a first-rate mystery plot. Brava!
—Chicago Sun Times

Wollie Shelley is a greeting card artist struggling to keep afloat financially and to pursue—despite a series of recent disasters—the search for the love of her life. She reluctantly agrees to be a contestant on the reality television show Biological Clock. The show’s premise: six eligible singles date each other, and the audience votes on which couple would make the best parents. Alas, Wollie isn’t having much luck finding a man she’d like to date “off the air,” much less father her child. As the biological clock ticks away, Wollie gets caught up in a much more pressing demand on her time. Her friend Annika has vanished into thin air and Wollie is convinced that she’s in grave danger.

When Wollie reports the disappearance to the Los Angeles Police Department, however, the detective assigned to the case seems more interested in dating Wollie than in finding her friend. So Wollie springs into action—and lands right in the middle of an FBI investigation into an international drug cartel. She soon finds herself being stalked by an assortment of threatening characters, including her fellow television contestants, who will stop at nothing to beat the clock.

With Dating Is Murder, Kozak delivers another sparkling treasure, a laugh-out-loud funny, literate mystery for readers of Janet Evanovich and Sue Grafton, and for Kozak’s own growing legion of fans. 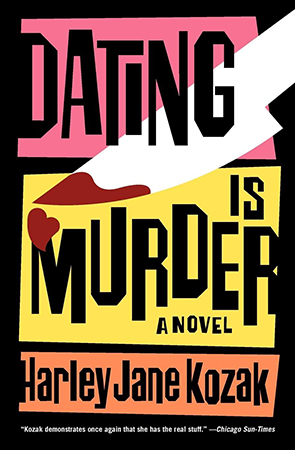 [A] stellar second adventure, set against the L.A. backdrop her actor-creator knows so well. . . The pace of this quirky cool mystery never falters, and the breezy characterizations will inspire more than a few to ask the author, ‘So, you gonna play Wollie in the film or what?’
—Publishers Weekly (Starred Review)
Featuring wonderful characters…Kozak’s smart whodunit is as fresh and funny as her first “dating” mystery, Dating Dead Men. Libraries of all sizes will definitely want both titles.
—Library Journal (Starred Review)
This delightful follow-up to Kozak’s first outing surpasses its predecessor and will have readers anticipating Wollie’s third adventure.
—Booklist
Kozak demonstrates once again that she has the real stuff. Combining lighthearted humor and romance with a suspenseful plot, she has created a compelling story.
—Chicago Sun Times
Actress-turned-author Kozak (her credits include 1989’s Parenthood) has a breezy style and delightful wit that leave us with just one question: When’s book 3?
—Entertainment Weekly

It is the voice of Wollie, who is fast approaching 40, that is spot-on perfect, humorous and poignant enough by turns to win the series new fans and make Kozak a contender in the never-ending quest for the perfect quirky mystery.
—The Los Angeles Times

Wollie Shelley—the endearing, idiosyncratic heroine of the award-winning Dating Dead Men, Dating Is Murder, and A Date You Can’t Refuse—returns in a funny murder mystery set in the world of television soaps.

When David Zetrakis, the producer of a popular soap opera, is found shot to death the day after Christmas, Wollie Shelley finds herself caught up in the murder investigation. Zetrakis was one of the many Mr. Wrongs in Wollie’s career as a serial dater, and her friend Joey has emerged as the media’s prime suspect. A hot-tempered celebrity who had dated Zetrakis and was fired from his show some years ago, Joey has inherited a million-dollar Klimt from him. But Joey is not the only potential suspect. Zetrakis left lots of nice bequests to the cast and crew of the show. And as the dating correspondent on a talk show called SoapDirt, Wollie, who’s required to dine and dish with the stars, quickly discovers that the behind-the-scenes intrigues of television soaps are as highly charged as the on-screen shenanigans.

When Wollie is not trying to protect Joey from an onslaught of predatory reporters, she’s helping her brother make the transition from a mental hospital to a halfway house and negotiating her relationship with Simon, her FBI-agent boyfriend. Dead Ex is another full-out romp of a mystery sure to please Kozak’s many fans—and win her many new ones, too. 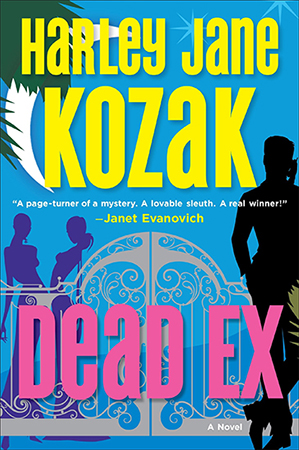 Dead Ex is a charming book with a well-done mystery and one of the most likeable heroines in the genre.
—Chicago Sun Times
For drama, wit and just plain fun, every life (and death) needs a little Wollie.
—Kirkus Review

A Date You Can’t Refuse

Serial dater and greeting-card artist Wollie Shelley goes undercover in a media-training company suspected of video piracy, but when a dead body appears on the company’s property, she’s caught up in a conspiracy that goes way beyond some stolen DVDs.

Wollie Shelley isn’t happy about taking the job as a “social coach” at MediaRex, but the FBI makes her an offer she can’t refuse. If she agrees to infiltrate the company, they’ll guarantee that her schizophrenic brother will have a home at the federally subsidized halfway house he’s come to love. So Wollie launches into teaching three foreign celebrities how to cope with the customs of Beverly Hills, improve their English, and become Oprah-ready. And when a coyote-chewed corpse appears in the MediaRex compound, Wollie realizes that her colleagues are concealing some serious secrets of their own. 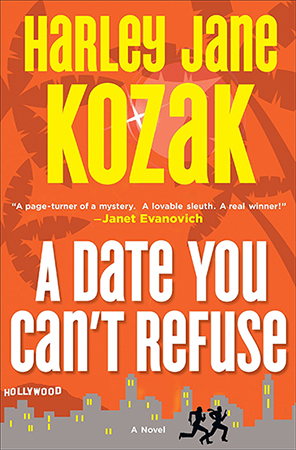 Kozak has a gift for creating characters that you care about and placing them in interesting situations. Her books might not exactly be realistic—OK, they’re pretty outlandish—but they sure are a lot of fun to read.
—Chicago Sun Times
Kozak engages the emotions–one minute she sends fissions of fear up your spine, and the next, she tickles your funny bone.
—Library Journal
Sharp and witty, but heartfelt.
—Kirkus Review
Kozak keeps the laughs and chills in bewitching balance.
—Publisher’s Weekly